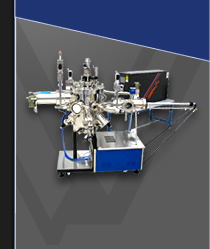 Q: What is the smallest substrate size I can use?

A: The standard In-Situ 4000 Process Monitor optics will measure a circular area of the substrate with diameter D/25 where D is the substrate to pyrometer distance. For example, if your substrate to pyrometer distance is 38 inches, then the area measured is a circle of 1.5 inch diameter. SVT Associates also offers an alternate version of the In-Situ 4000 Process Monitor which measures a smaller area corresponding to a diameter of D/90, with the consequence of an upward shift in the temperature measurement range to 500-1200°C. It is important that the substrate surface completely fill the measured area so that the measured radiation corresponds solely to the substrate and not filament heaters, or wafer mounting surfaces.

Q: What substrates may I use with the In-Situ 4000 Process Monitor?

A: The In-Situ 4000 Process Monitor performs single channel pyrometry at 950 nm wavelength, so any substrate which is opaque at 950 nm will work. We have tested the system with GaAs, InP and silicon substrates. Silicon is semitransparent at temperatures below 550°C so some heater radiation may penetrate the substrate and provide a slightly higher than accurate reading. Transparent substrates such as sapphire may be used if an opaque coating is applied to the back side of the substrate, in which case the temperature measurement is being made on the backside surface of the wafer. See the related answer to the question of transparent substrates in this FAQ.

Q: Can I use the In-Situ 4000 Process Monitor on transparent substrates?

A: It is possible under limited circumstances to use substrates which are transparent at 950 nm. The conditions which permit proper measurement are:

Q: What is the index of refraction of my film?

A: Here are some published values of index of refraction for several semiconductor materials:

Q: What is the reflectance of my substrate?

A: The In-Situ 4000 Process Monitor reflectometer needs to be calibrated against a substrate of known reflectance. Listed below are the reflectances of an assortment of substrate materials (at normal incidence and at room temperature) from published values.

Q: How should I calibrate the reflectometer to my chamber?

A: Here is a step-by-step reflectance calibration procedure which should work for most users.

Q: Should I use one-color or two-color pyrometry?

A: The In-Situ 4000 Process Monitor is designed to operate using the one-color, or single channel, pyrometry. The radiated intensity at 950 nm is converted to temperature and is accurate even when depositing thin films. Some users may have some difficulty measuring temperature accurately if the viewport window itself becomes coated with materials during deposition. When this happens, the coating generally attenuates the radiation and the observed temperature drops.

To address the problem of viewport window coating we have implemented a technique to re-calibrate the pyrometer using measurements at two wavelengths (950 nm and 850 nm). For those cases where the viewport coating is "metallic" as is the case of arsenic in GaAs epitaxy, the attenuation of light at 950 nm is largely the same as that at 850 nm and so the ratio of the two intensities is unaffected. We have provided a means of measuring the intensity ratio to easily update the single color temperature calibration in software so that drifts in temperature due to viewport coating can be easily accommodated. The two-color, or ratio, measurement in fact becomes invalid once thin films are deposited since the thin film interference affects the two wavelengths differently.

Q: What is the difference between one-color and two-color pyrometry?

A: One of the main features of the In-Situ 4000 Process Monitor is the ability to properly measure the temperature of wafers with growing dielectric films. Other pyrometers cannot do this.

Single color simply measures the intensity of emitted radiation in a given wavelength band. That intensity is mathematically converted to temperature based on Planck's law. The law however requires 2 unknown parameters: the "geometry factor" and the surface emissivity at that wavelength. The "geometry factor" is a measure of how much light is collected by the optics, how big an area on the wafer is measured, and how sensitive the sensing electronics is in converting the radiation to a voltage. Typical pyrometer manufacturers will calibrate the "geometry factor" against a "black body" which is at a known temperature. Black bodies have an emissivity of 1.0. A cavity or oven will approach an ideal black body, so black bodies are often constructed as small ovens with a hole the pyrometer can peer into. The emissivity of any surface is the fraction of light emitted from that surface with respect to an ideal black surface. Real wafers will have an emissivity less than a black body (< 1.0), so the user must know what the sample emissivity is to translate radiation intensity to temperature. All commercial pyrometers have dials on them which allows the user to set the emissivity of any real surface, which must be known from some other means.

There are a number of problems in using a standard pyrometer in a MBE system, some of these are:

Given these problems with standard pyrometry for MBE. SVT Associates intended to try to fix them.

The In-Situ 4000 has two special features which can fix all of the above problems.

There are other more conventional pyrometers which employ two wavelengths to measure temperature rather than one. If you use a pyrometer which measures emitted intensity at two different wavelengths and make the assumption that the emissivity is THE SAME AT BOTH WAVELENGTHS then you may perform a slightly different calculation than that performed in single color pyrometry. Here, you compute the ratio of the two intensities. If the emissivity of the wafer is the same at both wavelengths then the ratio of the intensities is INDEPENDENT of absolute emissivity. That is an ideal black surface with emissivity of 1.0 will produce the same RATIO as a surface with emissivity of 0.2. This frees the user from needing to know precisely what the emissivity is. The resulting ratio is used then to compute temperature. This technique may be useful when the vacuum viewport window becomes coated over time. The window transmission will drop as it becomes coated and the single color measurement will then read lower than it should. If one assumes that the coating has the SAME transmission at BOTH measurement wavelengths (good assumption for many metallic coatings), then the ratio technique is still accurate. Thus the two-color system is designed to compensate for problems #2 and #6 above.

In our experience, we have found that the ratio measurement is very dependent on the substrate material. We therefore have provided the software with the ability to alter the ratio calculation to suit different substrates. This is the function of the "Temperature LUT" or "look up table". We have provided a LUT which converts measured ratios to temperature for a silicon substrate. We measure this for each instrument on a special, calibrated, silicon wafer.

Thus the complete solution is:

This is the design philosophy of the In-Situ 4000 Process Monitor system. The software is intended to be flexible enough for users to use the information however they see fit.

A: In principle, yes the In-Situ 4000 Process Monitor may be used with a heated viewport. Two problems which may occur are:

Q: How accurate is the deposition rate measurement?

A: The In-Situ 4000 Process Monitor performs deposition rate measurements by fitting the oscillating reflectance as a function of time to a mathematical model.

Q: Can I use the In-Situ 4000 Process Monitor during substrate rotation?

The In-Situ 4000 Process Monitor system contains a special software sample and hold filter which accommodates even large amounts of wobble tilt. The reflectance is sampled once per rotation so that the measurement is correct, even when the wobble tilt is very large.

A: The answer is yes. It can be integrated into your temperature control system through a software interface. The pyrometer is not a "stand-alone" unit and must be run under the control of a Windows 9x/2000/XP computer system running the provided RoboMBE software program. The RoboMBE program will calculate the substrate temperature based on the substrate radiant intensity and the measured reflectance. The computed temperature is displayed on the computer screen, saved to a log file, and optionally available to another computer through the "Remote Control Interface". Please refer to our In-Situ 4000 Process Product Data sheet for additional information.